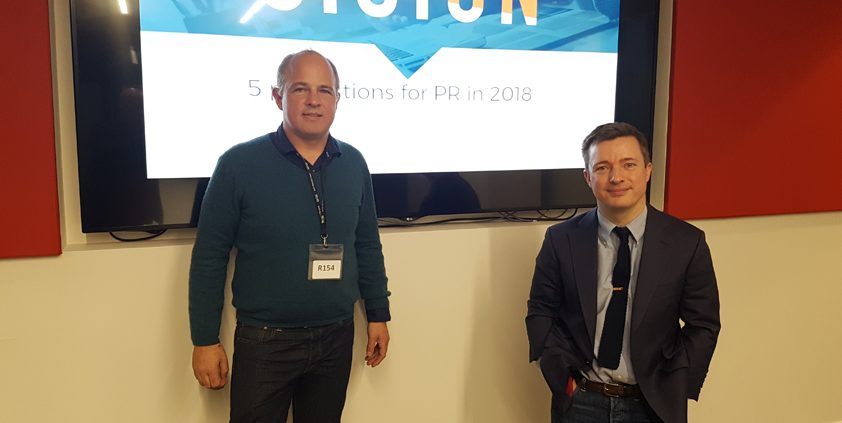 In this year’s final Cision webinar, Ketchum‘s Stephen Waddington predicted that 2018 will see communicators capitalise on the opportunities new technology is creating.

In a wide ranging presentation, the agency’s chief engagement officer outlined what he sees as the key catalysts for change in the industry today.

“It’s helping us become smarter in every aspect of what we do,” he added. “More opportunity is going to be created by this wave of technology. I’m hugely optimistic about it.”

From the promise of PR measurement technology to the changing face of media relations and the rise of “social leadership” – he described how he sees each of his top trends transforming the industry over the next 12 months.

PR will finally be recognised as a management discipline

Waddington began his presentation by commending the work of the PRCA for “beating the drum of professionalism” in public relations this year.

“It drew a line in the sand about what is ethical and what is unethical behaviour in our business,” he explained. “In 2018 we’re going to continue to see this break through as an issue. It’s absolutely critical to us to improve our value.” He argued that ensuring PR achieves professional status will arm communicators with the same authority as other execs in the boardroom.

Proper measurement will play a big role in achieving this goal. Waddington said that once you can show PR’s effect on your organisation’s business objectives using the same KPIs the board room uses, you will be able to increase the value you offer.

Communicators will use data to reach the right digital audiences

Noting that everyone on Earth will have an internet connection by 2030, Waddington examined the opportunities technology is creating for communicators as the media continues to move into the digital space.

“Organisations like Facebook, like LinkedIn, like Google are providing fantastic tools to us,” he said. “There are native tools we can use to understand where our publics are, what they’re talking about and how we should best engage with them.

“And then there’s a massive third party market emerging as well – with tools provided by companies such as our hosts today, Cision.”

“We’re having to operate at the speed of these new forms of media,” he explained. “Traditional PR and comms functions just cannot operate at that speed.”

“What we’re starting to do in our organisations is create newsroom-type models,” he continued. “This is an absolute requirement of modern public relations, to enable us to be responsive to the pace of conversation on the internet.”

He said getting approval for ideas quickly is typically the biggest challenge comms teams face when implementing a newsroom structure. To combat this, he suggested agreeing in advance what issues your company is happy to take a view on and create content for.

Media relations will continue to expand into influencer relations

Waddington observed that every new form of media that has emerged over the past 10 years has also created opportunities for individuals to create new forms of content around specific topics to build communities of their own.

“This is a huge emerging area of public relations practice,” he said. “As the media has fragmented, influencers provide a means for us to engage with their communities, with their audiences, and connect around topics that are interesting to them.

“I don’t think you could have any presentation deck at the moment about public relations without talking about influencers,” he quipped.

The best executives will invest in “social leadership”

He said executives that are serious about leading a modern organisation will invest in their social media footprints in 2018. This trend creates a huge opportunity for communicators to understand how these networks function and help them create content that works.

“When I started out in PR, executive profiling involved writing byline articles or pitching stories into the national media, or the trade media,” he explained. “Now, executives are using social forms of media and owned forms of media to create their own content and publish their content out onto either owned blogs or networks.”

Finally, Waddington namechecked AI as one of the hottest topics in PR. He said there’s now a huge opportunity for the PR industry to be assertive and uncover novel applications for internet connected devices like the Amazon Echo.

“It’s something we’re very firmly experimenting with within my business to understand the relationship between a consumer and using one of these devices,” he said. “You can already see it’s stripping out a layer of mediation with the internet.”

“The other area is around bots,” he added. “People are creating bots for basic sales functions, basic customer service, basic travel information – so if you want to query the time of a train or plane you can do that.”

Opinion: Why “PR” is having a renaissance
Brendon Craigie, co-founder and managing partner at Tyto PR, examines why PR professionals are once again adopting the PR moniker. The public relations industry is in the [...]
News Analysis
Request a Demo and Pricing
Connect on Social:
Opinion: Why communicators must prepare for gender pay gap reporting