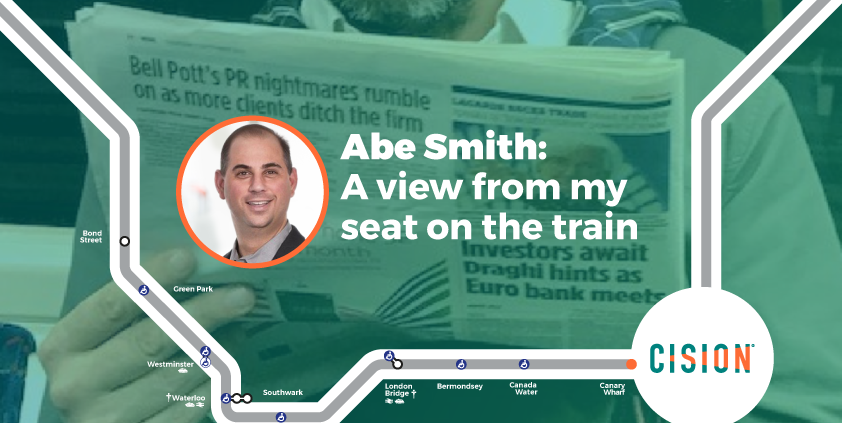 I couldn’t help but notice. The signs were everywhere. The Apocalypse may not be coming after all. At least not on the tube in London.

It was on the train, in my first week in London, where I first noticed something about media scene in Europe. Or, at least, in the UK. While I thought I’d see carriage-after-carriage replete with Kindles and iPads – and, yes, there were many – I was amazed by the sheer volume of paper. Commuter-after-page turning commuter were affixed to their morning fuel of The Times, The Mirror, The Guardian or otherwise. I’m not immune either. The Metro seems to beckon me daily – and it’s hard not to grab a copy of the free newspaper before the carriage doors close.

But as I looked around me during my first few journeys, the evidence mounted, quite literally, as I saw the discarded papers littering the seats or the trash cans at Canary Wharf where I exit daily. It gave me pause.

Was Europe a relic – a last stand for the printed press? While the pictures of the celebrities and the royal family plastering the pages of The Sun might exude confidence, the numbers paint a moving picture.

According to Audit Bureau of Circulations (ABC), in September, very few of the UK’s national newspapers were in ascent; most in print were in decline. With just a small group of exceptions, as mobile and digital audiences rose, paid-for print titles were suffering.

Yet, it’s the paradox of what you see on the train, and what the economists tell you, that seems emblematic in the UK. There is an emotional connection to print and regard for ‘good journalism’ that buoys the country and seems to inspire people to grab the page, quite literally. Yet, as an American, to hear recently that The Wall Street Journal is pulling out of print in most international markets is telling. While the writing is not on the wall, it’s probably on a tablet or some other device to come (the reinvention of Google Glass perhaps?). The surge of online advertising and the power of digital as a driver for ad sales, is, of course, fuel for this fire.

As a marketer, and as a technologist, it makes me consider how best to straddle the old and the new. Changes don’t just happen overnight but we must all take the responsibility to shepherd and embrace the new while we appreciate the past.

“The words of the prophet are written on the subway walls and tenement halls,” as my compatriot, Paul Simon, sang in his epic Sound of Silence. And while he was right – they were written – what’s the new take of how media will move the world? Will it be 140 (or, indeed, 280) characters or less? There will always be a new take on classics like the Sound of Silence. Check out Disturbed’s view for just one update.

Our key takeaways from CommsCon
We promised that CommsCon would be a day of discussion, insight and debate, and judging by the response we’ve had from our delegates, we are delighted to have lived-up to the [...]
Industry News
Request a Demo and Pricing
Connect on Social:
Abe Smith: London Calling