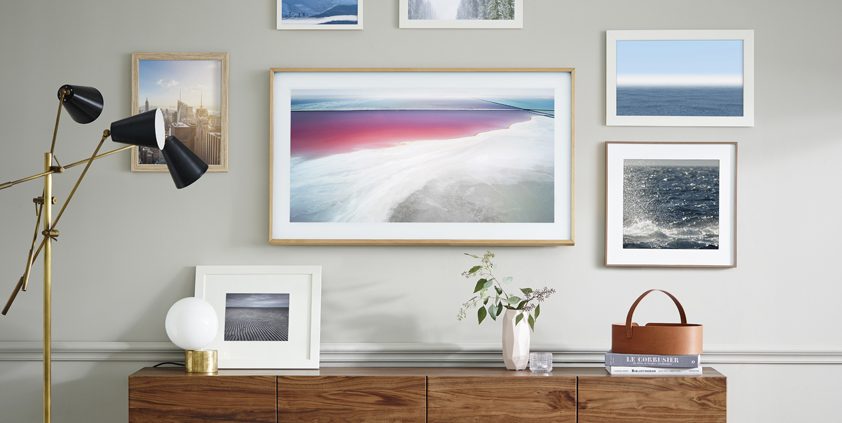 Samsung’s innovative new TV, The Frame, is fully customisable to display preloaded artworks or family photographs when not in “TV mode”.

Taylor Herring was tasked with launching The Frame with a creative news story that would drive mass awareness.  We devised a news story that revealed the nation’s favourite British artworks. We then released this story to the media along with a branded video hosted by The Culture Show presenter Miranda Sawyer, which revealed the survey results while also showcasing the new TV.

The story generated over 250 fully credited pieces of coverage on the launch day and became a national talking point, trending across social media.

Our objective was to raise awareness of the launch of Samsung’s new TV, The Frame, and drive purchase intent through a creative campaign that would garner coverage in mainstream media beyond the tech press.

The campaign creative stemmed from The Frame’s unique and innovative function to display art when not in use. Taking this as our cue, we devised a news story that would look at how British tastes in artwork have changed over the years and what sorts of artwork the public would most like to display in their homes.

We engaged a panel of art editors, national newspaper writers and art publications to create an informed shortlist of top British and international artworks. We then put this list to a public vote via a representative survey of 2,000 adults.

Our results revealed that Banksy’s Balloon Girl is the nation’s favourite British artwork, beating old masters including Turner and Constable – a story we were confident would resonate with national news outlets.

Working with The Culture Show presenter Miranda Sawyer, we then produced a branded video that featured footage of The Frame in art mode as well as revealing the nation’s Top 10 British artworks. We also engaged Miranda to act as the story’s spokesperson for a day of broadcast interviews.

The campaign generated over 243 million opportunities to see (OTS), reaching 62% of all UK adults and 59% of UK millennials.

The story garnered a total of 259 fully branded pieces of coverage – including 55 articles in national titles – and became a national talking point. It trended on Twitter, featured on the Mail Online homepage and was the top arts story on The Guardian website on the day of launch.

The branded video was embedded in dozens of high value news sites and social media feeds including The Sun, The Telegraph, The Independent, the London Evening Standard and the Mail Online.

Sentiment analysis showed that 99% coverage was favourable in tone, 48% was strongly favourable and 89% featured a key brand message.

Opinion: Why “PR” is having a renaissance
Brendon Craigie, co-founder and managing partner at Tyto PR, examines why PR professionals are once again adopting the PR moniker. The public relations industry is in the [...]
News Analysis
Request a Demo and Pricing
Connect on Social:
PR Case Study: Kin&Co – Somerset Garden Day