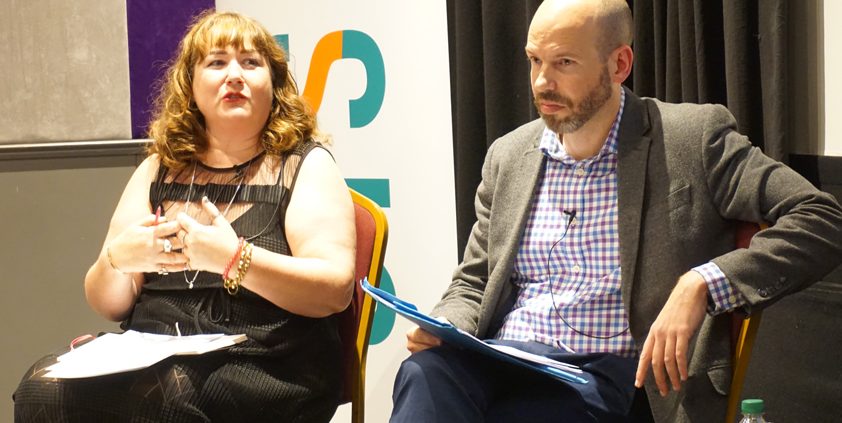 Ruth Yearley, Ketchum’s insight and strategy director, and Paul Hender, head of insight at Cision, argued the merits of data and instinct in front of an engaged audience at the Courthouse Hotel.

With Yearley arguing the need for instinct and Hender putting the case for data, the pair agreed that communications professionals should not use data unquestioningly and to be aware of what they were measuring, and why in order to achieve the best results. The pair also acknowledged that human instinct is needed to turn raw data into an engaging story which resonates with their target audience.

Art and science need to work together

Despite coming at the debate from different points of view, both panellists articulated that communicators needed to be mindful of both art and science to be successful.

Yearley cited campaigns by Spotify and Kleenex as a way in which data was used creatively to produce engaging stories. She noted that Kleenex’s Achoo app in the US used data from the Centre for Disease Control and Prevention to find areas which would be ‘germ ridden’ three weeks before outbreaks of illness began. “They tracked illness so that they could tell people that there was a cold coming and that they should think about buying tissues. It’s genius,” she said.

Hender recalled his time successfully running Metrica with Richard Bagnall, now chairman of measurement organisation AMEC, because the pair had completely different Myers-Briggs Type Indicator personalities. Bagnall’s Extrovert, Sensor, Feeler and Perceiver (ESFP) personality type is associated with people in sales, while Hender’s Introvert, Intuitive, Thinker, Judger (INTJ) characteristics are those typically found in scientists, meaning that the pair had the complementary skills which enabled them to cover all aspects of running the business.

He also recounted how his son was worried that his dad, a physicist-turned-measurement-guru would be unhappy with him studying art for his GCSEs as well as science, whereas Hender told him that it is possible to be both creative and scientific.

“This is an important point about the debate we are having today, it’s not about one or the other, it’s about how the two can work together,” he said. “The biggest scientific breakthroughs have involved huge pieces of creativity and insight, such as Isaac Newton being inspired by an apple falling from the tree and inventing a whole new form of maths, calculus, to explain his laws of motion.”

No substitute for instinct

Yearley opened the debate with an impassioned speech about how instinct was being vilified in the industry, to the point that people defined as “creatives” were now asking whether she had data to back up her “whims”.

Her defence of instinctive insight highlighted that insight was getting people to see things from a different point of view and revealing an “unspoken known”, rather than coming up with “Eureka!” moments, which required knowledge gained from life experience and observation.

She also worried that communicators are relying on data for reassurance rather than to derive insights. “Suddenly data has become the big, burly reliable minder which has your back and will make sure that nothing will get in which isn’t right,” she said. “It’ll protect you if anyone asks you a question.”

She added: “Data alone as a source of insight without the injection of the personal, without the instinctual unearthing of the unspoken knowns, without the empathy, will always be less interesting, less engaging and engender less connectivity with our audiences.”

Data is needed to get the attention of the board

Hender countered that part of the reason that earned media practitioners receive far less money than their paid and owned counterparts is because communicators are not speaking in the language of the C-suite: data and measurable results.

He described the work which he has done with Microsoft’s comms team to interpret data that can be presented to the company’s executive decision makers. He noted that by using data, the company found that its tactic of targeting tech media gave it a high number of impressions but low engagement, as well as illustrating that its audience was actually interested in other types of media.

“The lesson for Microsoft is: don’t go with a historical point of view, you need to change your course and change your focus and change the type of media you should be targeting,” he explained. “Without data it is very difficult to make that business case internally.”

Being patient and measuring the right data

Both Hender and Yearley agreed that data is only as useful as the way it is used, with the PR industry often using the wrong measures to justify something or to get quicker results.

“Facts need to be dug into, stretched and bent and added to before they become anything near an insight,” Yearley said. “I think it takes longer to listen, to interpret and to get the right thing. It’s easier to give the CEO a number. You need time and data is a short-cut, it is quick, and often quick isn’t good.”

Hender said: “The danger is, with the pressure to count, you end up saying ‘I’ve got to count something’, and that will do. You end up counting something that is easy to count rather than something which actually counts.”

He added: “The challenge is that we all instinctively go for the quick and cheap option, this is why when we choose to measure something we often pick the easiest thing you can possibly measure, but at the end of the day what you measure should support what you are trying to
do.”

If you are interested in attending future Cision events, including next week’s Media briefing with Financial News, all upcoming events can be found on our website.

Opinion: Why “PR” is having a renaissance
Brendon Craigie, co-founder and managing partner at Tyto PR, examines why PR professionals are once again adopting the PR moniker. The public relations industry is in the [...]
News Analysis
Request a Demo and Pricing
Connect on Social:
Opinion: Equality still a long way off for women in PR