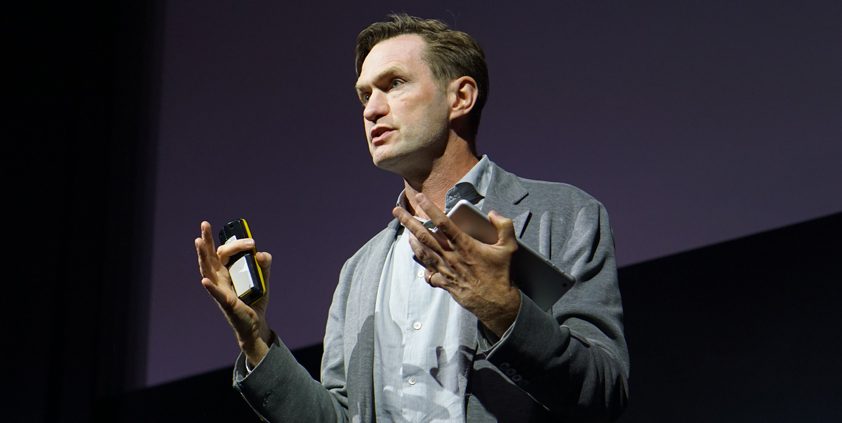 To a packed room of leading PR and communications professionals, he made a series of bold predictions about the challenges consumer brands are facing and how technology will continue to shape the future of comms.

He argued that the way consumers engage with content is continually changing. Many people now prefer to consume content in silence, Sanderson said. The majority of videos in Facebook newsfeeds are viewed with the sound off and communicators must be aware of trends like this to create effective PR campaigns.

Similarly, he claimed virtual reality presents an unprecedented opportunity for immersive online or “augmented reality” shopping experiences – something he sees companies taking advantage of as these technologies are adopted by the public.

Consumers live in a state of total distraction, he said, with technology constantly bombarding them and vying for their attention. People use technology in an attempt to optimise their daily lives, but it generally has the opposite effect.

“How is it we’ve lost the ability to do just one thing and do one thing well?” he asked. “The average human attention span has fallen, it’s estimated, from about 12 seconds in 2000 to just eight seconds by 2015.”

He continued: “We live in a world of “skip culture” – but that can be countered with audacious, expressive advertising. Consider bold partnerships that blur the boundaries between genres.”

Despite the ways consumer behaviour is changing, he said long form content is not dead in the water. Data shows that long videos and articles attract the same number of viewers as short ones, but twice as many people get all the way to the end.

Sanderson said: “As Ben Jones from Google has said, a great story can still grab an audience, even with the ever-present ‘skip’ button. The challenge is to figure out how to blend story and brand.”

He concluded: “Again, there’s an opportunity here for us to think about how we create stories and platforms where there’s real meaning and there’s a real opportunity to convey what we think is important about our brand or product.”

A range of speakers, including Nicola Green, director of corporate affairs, Telefónica UK, Lucy Hart, head of influence, Mischief and Kevin Akeroyd, CEO, Cision, talked about the future of comms and a new era of modern communications at the Cision World Tour event in London.

Opinion: Why “PR” is having a renaissance
Brendon Craigie, co-founder and managing partner at Tyto PR, examines why PR professionals are once again adopting the PR moniker. The public relations industry is in the [...]
News Analysis
Request a Demo and Pricing
Connect on Social:
Opinion: The future of PR isn’t science fiction