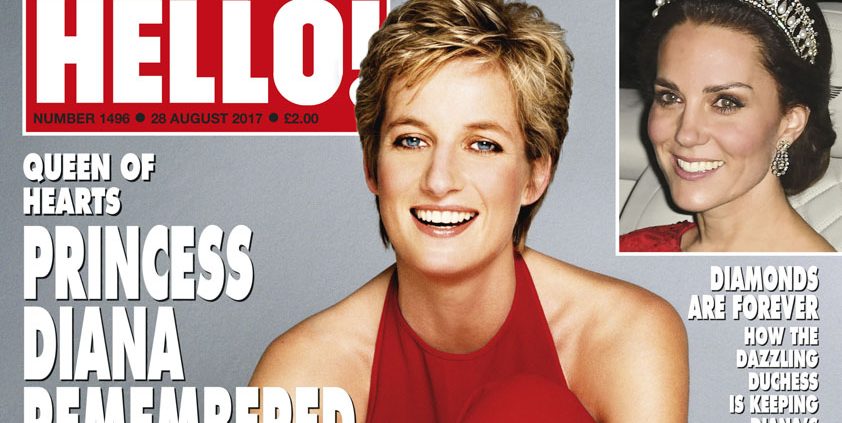 Rosie Nixon, editor-in-chief at Hello! Magazine, reveals her dream scoop, how PRs can partner with the title – and why the Duke and Duchess of Cambridge are the “gift that keeps on giving”.

You’ve been at Hello! for close to a decade now. What are the biggest celebrity stories you’ve run in that time, and what made them such a big hit with your readers?

Weddings continue to be a big hit with our readers. Our coverage of Pippa Middleton’s wedding in May was one of our highest-selling issues so far this year, which reflects the increased interest in the younger generation of royals.

Particular highlights from my 10 years at Hello! include interviewing Robbie Williams and Ayda Field the day before their wedding at home in Beverley Hills, attending Sam Branson’s wedding to Isabella Calthrope in Sir Richard Branson’s private game reserve in South Africa, and our fantastic coverage of Prince William and Kate Middleton’s wedding in 2011.

How would you describe the typical Hello! reader? Who are they, what are their interests and why do they buy the magazine?

We have a core reader who is in her late 30s, ABC1, professional and a keen juggler of family life with work, friends and everything else. She has a strong interest in fashion and beauty, as well as keeping up with the latest royal and showbiz news. Basically, a woman just like me!

With media consumed on so many platforms these days, we are available to our audience 24/7 – and reading a printed magazine is more of a luxury experience, so the content has to be more exclusive and special than ever.

Hello! launched in the UK with an interview with Princess Anne in Buckingham Palace. Is the British public still as interested in the royal family now as they were back then?

I recently referred to the Duke and Duchess of Cambridge and their young family as the “gift that keeps on giving” for Hello!, and it’s true.

Our strong sales figures show that interest in the royal family is high and this is largely due to the impact of William, Kate and Prince Harry.

The spotlight they shine on causes close to their hearts is commendable and they are gifted with the same humanity and empathetic qualities of the late Diana, Princess of Wales. They also transcend age groups – appealing as much to younger generations as to the old. Long may it continue.

Many of the world’s biggest celebrities, including President Trump, have now embraced social media as their primary means of communicating with the public. What does this mean for celebrity journalism?

It has certainly made it easier for stars to control their image and have greater ownership when it comes to releasing news to their fans – which has made it harder to secure genuine exclusives, in some respects.

However, social media cannot be compared with the big, glossy, photo-shoots that we pride ourselves on producing in Hello!. We offer a trusted environment for stars to showcase an aspect of their life in greater depth than social media allows – meaning the two work very well together.

Obviously, many of the best celebrity stories have historically been scandalous and inherently unpredictable. But what’s your dream celebrity scoop? And what do you predict will be the biggest stories in the coming months?

At Hello! we pride ourselves on steering clear of scandal and negative stories for a quick sales spike. We play the long game and have built up years of trust so that the big names turn to us when they have a genuine scoop to discuss.

Of course, all the exclusives we are working on remain confidential. But we do have something very exciting in the pipeline for later this year – you’ll know about it when we reveal more details on our website.

Like many royal watchers, I am hoping that Prince Harry might become engaged to Meghan Markle before long. And, if I had a crystal ball I would hope to see another baby announcement from William and Kate before the year is out.

How can celebrity and women’s weekly titles compete with digital publications like MailOnline? Do you see some publications following InStyle’s lead and becoming “digital first” in the years ahead?

I think the market is showing that there is space for us all and, as I mentioned before, Hello! is about a luxury experience – taking a precious five minutes or half an hour out of a busy day to kick back, relax and get lost in our aspirational world.

That said, the weekly magazine market has taken a battering in recent years and I wouldn’t be surprised if we unfortunately see some casualties in the months ahead.

Fashion was one of the first industries to successfully capitalise on the new digital era, so I can see why going “digital first” was sensible for InStyle. I can imagine more fashion-focused titles are looking closely at this model.

I love hearing from PRs! It is always a thrill to receive a relevant, timely idea for a feature, celebrity interview or commercial partnership. The way we work with brands has changed enormously over the last year and we love hearing creative ideas.

Email is probably best and do take note of the magazine masthead – directing your pitch to the relevant person is key and will avoid unnecessary time-wasting.

If you could go out for dinner with any celebrity (alive or dead), who would you choose and why?

Such a hard question – I can think of many! But, as she is especially on my mind this week, it would have to be Princess Diana. So many questions still need answering and I could tell her what a fantastic job her sons are doing.