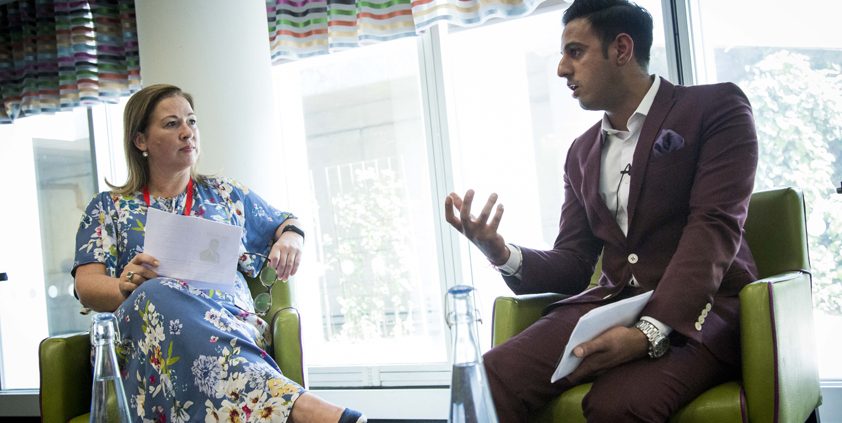 Speaking to Cheryl Douglas, Cision’s head of media research and jobs, Kharpal said that out of the 50 or 60 pitches he receives daily, he only looks at five as the others are irrelevant.

“It’s a waste of everyone’s time,” Kharpal said. “The PR involved, the company involved and myself as well. It goes back to the point of tailoring the message and understanding the journalist.

“From when I was training to be a journalist I’ve always asked myself ‘who cares?’ when thinking about stories. If I can’t answer that immediately, then no one cares.”

Understand what works for different platforms

Citing the differences in CNBC’s output, Kharpal emphasised that PRs needed to know how outlets would cover stories differently for each of their various platforms.

He noted that CNBC’s television output was very “loud and colourful” in order make stories interesting to its audience, whereas its online output has a very different tone.

“Understanding those different platforms and actually how certain stories can be tailored to certain platforms is key now,” he said.

Moving onto the subject of crisis communications, Kharpal said that the times where he has had disagreements with PRs is when they have asked to him change a headline or something in a story they didn’t like because of the tone.

He commented: “I’ve had a lot of times where someone has told me that I’m wrong. The only time we will issue a correction or clarification is if it is factually incorrect. If you don’t like the tone or the headline, we don’t care.”

Kharpal warned: “If you keep pushing on making those changes, that will kill a relationship with a journalist.”

Reacting quickly in a crisis

Referencing the recent revelations on Facebook and Cambridge Analytica, Kharpal explained to his audience of crisis comms professionals that if a company does not provide accurate information quickly, others will fill the void with speculative information.

He added: “The best way I’ve found for companies to deal with a crisis like that is to be honest, be quick and to put your leadership up front as soon as possible, as it’s on their heads.”

Kharpal was one of the first journalists to ask comms professionals to send him pitches over Snapchat. However, he said he found the pitches he did receive to be a mixed bag.

“It was an experiment to see if it would at least work in order to cut down the number of emails I get,” he explained. “It was not as good as I hoped it would be.”

He added: “There are some stories which can’t be fully described by an email or a phone call, sometimes it needs some visuals. Something like ‘we’ve got this cool new product, check out what it does, have a look on my Snapchat or Instagram story’ would work.”

Opinion: Why “PR” is having a renaissance
Brendon Craigie, co-founder and managing partner at Tyto PR, examines why PR professionals are once again adopting the PR moniker. The public relations industry is in the [...]
News Analysis
Request a Demo and Pricing
Connect on Social:
How PR measurement saves lives