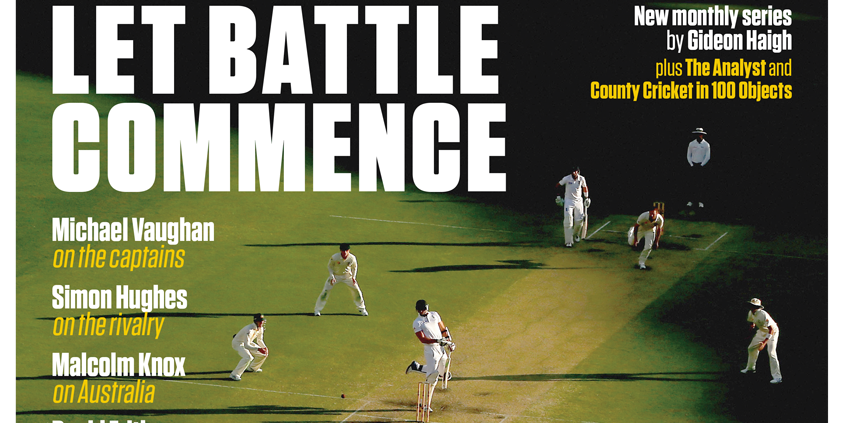 Huw Turbervill, managing editor at The Cricketer, discusses the magazine’s loyalty to its readers and the upcoming Ashes series, including a score prediction.

You’ve just launched your Ashes preview edition, what do you think will be the main talking point throughout the series?

Whether it matters if Australia have pacier bowlers than England. The tourists have a superb, wily, experienced new-ball pair in James Anderson and Stuart Broad, with steady support from Chris Woakes… but the hosts’ attack, especially Mitchell Starc and Pat Cummins, is decidedly spicier.

The batting units are pretty similar, with two class players each in Joe Root/Alastair Cook and Steve Smith/David Warner, and a lot of unknown quantities. Extra speed and home advantage just give Australia the edge, probably…

You’ve added 16 pages to the publication, what extra content is set to feature in the expanded magazine?

We have some exciting new series. The brilliant, inimitable Gideon Haigh is penning a new monthly series for us; editor Simon Hughes – aka The Analyst – forensically looks at top players’ techniques.

I am writing a series called County Cricket in 100 Objects, and there will be room for at least one extra new feature per month. The magazine was already chocker with the game’s best writers and regular features, and this gives us the chance to let things breathe a bit more, using even more great pictures.

Describe The Cricketer’s relationship with its readers and tell us about how to get the right blend of cricketing content to engage them?

We try to be loyal to our readers – we have been together a long time (maybe some are still reading from when we started in 1921!). Perhaps a few years ago we deviated from the fairway in terms of trying to be too different, but now it’s ‘give the readers what they want’ all the way.

We have an annual survey, the results suggest we are on the right lines, and people are coming back to us. It is a smorgasbord of international, county (now covered in greater detail than ever!) and recreational cricket, with great writers and the best pictures. We are continuing to invest in a lovely looking magazine with great reads and top journalism.

We are relaunching the website in the coming months. It will maintain the integrity of the magazine, but we recognise the need to have a point of difference with some of the content we produce online.

It’s shorter, more easily digestible and generally tries to make cricket more accessible to the casual follower of the game. We have also seen great engagement with video content – which we produce a fair amount of in-house.

While the magazine leans toward the longer armchair reads, the website will be more short-form and news-centred. We are aiming to provide up-to-date daily reports on world cricket, stats-based articles and a mix of feature pieces with a focus on imagery and video content.

What sort of stories do you look to run in the Googly column?

As with a googly in cricket itself, something offbeat, different, left-field, something other columnists would not go for. Unexpected. I write it once a month for the mag, and once a week for the website.

How would you describe your relationship with PRs? What pitches would you like to hear from them and how would you prefer them to pitch?

The ones I have interacted with are courteous, the dealings relatively straightforward. Sometimes they want an essay in italics at the end of articles promoting their brand, so that’s something to watch. Us journalists still find alternative ways to get access to the stars! Good old-fashioned journalism…

But of course, it’s good to get the chance to speak to Joe Root or Eoin Morgan whichever way that is achieved. PRs are generally not too draconian in what we can and cannot ask – though Ben Stokes has been out of bounds of late…

If you had to write about a sport other than cricket, which one would it be?

It would be football. I used to write match reports for the Daily and Sunday Telegraph, and Daily Express.

Australia to win at Brisbane and Perth and one of the MCG or SCG, England to win the other two. 3-2 to the hosts (alas!).

Opinion: Why “PR” is having a renaissance
Brendon Craigie, co-founder and managing partner at Tyto PR, examines why PR professionals are once again adopting the PR moniker. The public relations industry is in the [...]
News Analysis
Request a Demo and Pricing
Connect on Social:
60 Seconds with Quidditch Premier League comms director Tom Ffiske