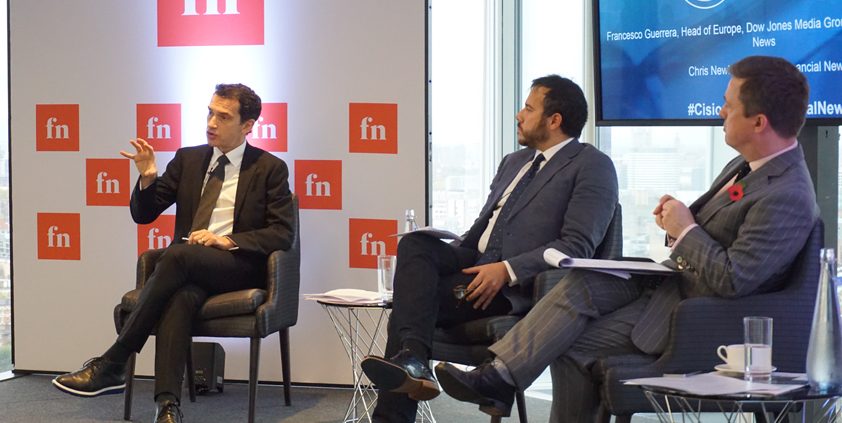 At an exclusive Cision media briefing yesterday, Chris Newlands, editor of Financial News, outlined the publication’s aim to set the agenda in the City and compete with the FT’s financial services desk.

Francesco Guerrera, Financial News’ publisher and head of EMEA at Dow Jones Media Group, joined Newlands at the event in its Central London offices where the pair elaborated on what its audience of financial professionals want to read about, and new features being added to the publication.

The editorial team focuses on producing content for its website on a daily basis. Its print edition is comprised of the best online stories and around 10 unseen articles – including the front page splash.

In conversation with Cision’s head of content marketing and communications, Philip Smith, they also discussed subjects ranging from how Financial News is positioned to big ongoing financial stories.

Interesting stories are the key

Newlands emphasised how the publication looks to break stories in order to achieve its aim of setting the agenda for the City. He stressed that no story is too niche if it is interesting to its readers and that the editorial team is interested in news across asset management, hedge funds, private equity and investment banking.

“We want to break stories, we want to be interesting and we want to provide news that other publications aren’t providing,” he said. “Interesting is the key. I tell the editorial team to forget the stories which are boring so they have more time to work on the interesting ones.”

“Any pitches need to stay within the boundaries of what we do, I often see pitches which are inappropriate for the Financial News,” Guerrera added. “We are not going to write about personal finance, I don’t care about retail banks and stop pitching about mortgages.”

Since joining in May, Newlands has introduced new features to Financial News, with the biggest being “An Audience With”, an in-depth interview with people from finance or those with an interest in the industry. Lord Myners and Jack Bogle are among those to have been featured, with Nigel Farage and George Osborne set to appear in the next few weeks.

“We didn’t have a big interview slot, it was crazy quite frankly,” he said. “We want to serve this up to current readers but also use it to grow the readership. This is our jewel which we are coveting at the moment.”

The publication is also set to add more content on commercial property, to the extent that it is hiring a new reporter for the patch. Newlands stated: “You can’t set the agenda for the City without writing about property.”

With an informed readership approximately comprised of 40% traders and bankers, 40% asset managers and 20% professional service workers, the title sits in a unique marketplace.

“Financial News is not a siloed trade publication,” Guerrera explained. “It is different from the national newspapers because it has the ability to go deeper than them, even the FT, on specific financial issues.

“The bar set is much higher because the readership’s knowledge is much higher. If we did a story stating that MIFID II could lead to fragmentation of liquidity in capital markets their response would be ‘well, duh’,” he quipped.

The title also has the rare distinction of having a younger audience skewed for its print publication rather than its online offering. Guerrera believes that this is down to younger financial services professionals using it to help them with their work, with it being used as a form of mandatory reading, a type of “homework”.

The shadow of Brexit

The overriding story affecting the financial industry is Brexit. Newlands is clear that Financial News does have a hard editorial line that Brexit is “a bad thing” which is reflected in the opinions of the demographic.

He said: “It’s a topic we’re covering day-in-day-out, we’re really interested in what companies are doing, our readers are interested in how negotiations are going, what rivals are doing and how it is going to affect the bottom line.

“Our European coverage will be determined by how much the centre ground shifts from London to the rest of the Continent,” added Guerrera. “Our coverage would only increase geographically if we see a shift away from London. Then we would have to examine whether we would put a correspondent in Frankfurt or increase our muscle in Paris.”

Opinion: Why “PR” is having a renaissance
Brendon Craigie, co-founder and managing partner at Tyto PR, examines why PR professionals are once again adopting the PR moniker. The public relations industry is in the [...]
News Analysis
Request a Demo and Pricing
Connect on Social:
Why measurement is the key to rapid earned media growth