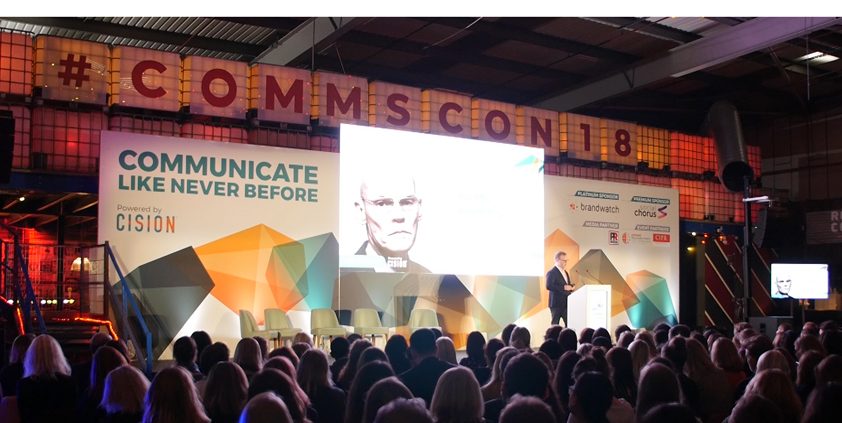 Sir Craig Oliver, David Cameron’s former director of politics and communications, gave the keynote speech to an enthralled and packed Hawker House at CommsCon on Tuesday.

He provided a fascinating insight into his time in Number 10, his thoughts on what went right and wrong in the Brexit campaign, and the lessons he’s taken from his time in politics to take to his new role as senior managing director of Teneo Blue Rubicon.

Storytelling was a key theme of the day’s sessions, and Sir Craig was no exception as he urged businesses to “tell your own story, or it will be told for you”. Oliver spoke of his experiences in being instrumental in  moving Number 10 into the digital sphere, and the importance of fully embracing the digital media world to take control of your own destiny.

He told the PR and comms professionals in the room of his surprise at just how many businesses weren’t prepared to fully embrace digital media – that they would happily market digitally, but not communicate digitally. In the case of crises, then, these businesses were relying on others to tell their story for them.

Later in the day, we saw examples of businesses who successfully managed crises by owning their own narrative, just as Oliver urged – most notably from KFC’s ‘no chicken crisis’ and the company’s much-lauded ‘FCK bucket’ response. Similarly, Virgin Management talked about how they have stopped relying on press releases, and instead would point journalists towards their own content.

Oliver posed four fundamental questions that all businesses must ask themselves, which centre around creating a strong and authentic story:

In a turbulent and incoherent world, Oliver said, it is increasingly important for businesses to “realise that there is a price to silence”. With the world changing at an alarming rate, many who are uncomfortable and concerned about this put the blame at the door of business. Therefore, businesses must change strategy – rather than sit contentedly on the sidelines, businesses must be willing to take risks to create an authentic and true story about their values, their culture and what they stand for.

PR and comms has often been in a defensive, “crouching position”, said Oliver, but as the world moves towards populism and digitalisation, PR needs to promote itself and be willing to stand up and fight for its position. “Be a champion for comms in your business, because it’s never been more vital”.

Opinion: Why “PR” is having a renaissance
Brendon Craigie, co-founder and managing partner at Tyto PR, examines why PR professionals are once again adopting the PR moniker. The public relations industry is in the [...]
News Analysis
Request a Demo and Pricing
Connect on Social:
Cision Insights: Why speed is of the essence in a crisis