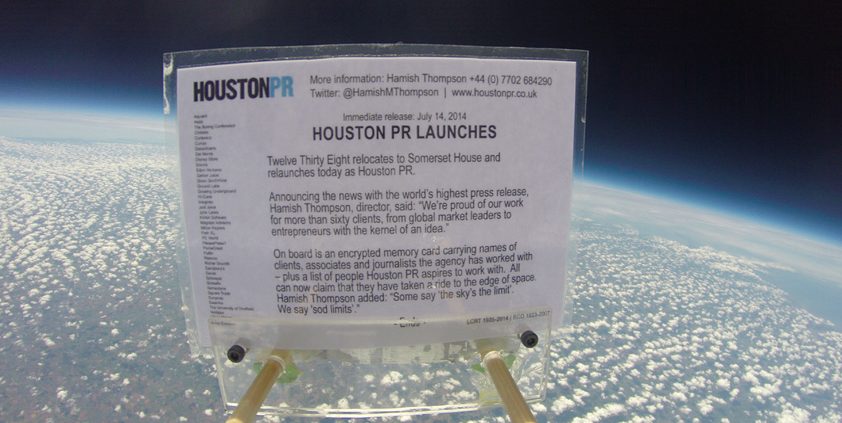 Hamish Thompson, managing director of Houston PR, explains how the space theme runs through the fabric of the agency, sending a press release into orbit and how Houston juggles its diverse client list.

To celebrate your rebrand to Houston you launched a press release into space. Who came up with the idea and how on earth did you achieve it?

I’ve been a space obsessive since I was six years old. I saw the Apollo 11 moon landing live on TV from my classroom in Australia. I lived near the huge satellite dishes that relayed Neil Armstrong’s one small step to Mission Control in Houston.

It’s an obsession I’ve never shaken, which is why I commute to work occasionally in my replica Apollo 11 space suit and why sending a press release to the final frontier seemed the, er, ‘logical’ thing to do.

Above all, it’s a bit of fun. On a whim I wore the suit, accessorised with a scarf, to London Fashion Week a few years ago. I got papped, interviewed for Fashion TV, and made it into the trendsetters page of the daily paper for the show.

To my everlasting delight, six months later there were space suit inspired outfits on the catwalk. On my tombstone it will read: “Hamish Thompson – changed the course of fashion history.” Those who are familiar with my dress sense will enjoy the irony.

The agency really embraces the space theme. How does that affect the work that you do?

The important bit of the theme is the idea that nothing is impossible. Sometimes a new client will phone up and say ‘Houston, we have a problem’. Solving problems is the best part of the job. Solving problems in unconventional ways is crucial to successful PR. Otherwise, they put you through to advertising. Remember advertising?

Part of your ethos is that human creativity trumps automation. How does that translate into your comms strategies?

Back in the eighties there was a show on TV called Treasure Hunt. Anneka Rice was running around the country with a film crew in tow, hunting for treasure and miraculously able to speak to the studio. Now we have the camera crew, the editing tools and the link to the studio and GPS in our pocket. The fundamentals are the same.

What hasn’t changed is that humans are solving the puzzles. They can just do it a bit faster. There’s that old line that history doesn’t repeat, but it does rhyme. I wrote a bit about that, and some of the other things I’ve learned about PR.

You work for a wide range of clients in different sectors, how challenging is it to switch between briefs?

It’s the best part of the job. Expertise is far more important than experience. Coming at a problem with a fresh set of eyes is really valuable.

There was an old building on the MIT campus that was falling to bits. They put all the ‘too hard to classify’ projects into that building. Because the building was falling apart, there were loads of accidental collisions between ideas which led to some amazing discoveries and lots of Nobel Prizes.

There’ll never be a Nobel Prize for PR, but the opportunity to be thinking about, for example, an Underground Farm, a card retailer, a software business, a pub chain and a super-budget hotel chain over the course of a few days, means that inevitably the brain finds patterns and interesting connections and that leads to better storytelling.

You spent a lot of your time working in the retail sector before setting up Houston. How much has the landscape changed in the sector since you worked in it?

A lot, though the apocalyptic cries about e-tail destroying retail have so far been overplayed. We have e-tailers going into retail, for instance (Amazon are opening shops), and huge amounts of work are going into serving the shopper wherever he or she is.

Retail is all about theatre and for ambitious retailers PR always has been, and always will be, the perfect promotional tool. The best retailers, many of whom I’ve had the opportunity to work with, have a bit of circus in their blood.

Are there any other sectors Houston is looking to expand into?

Discipline-wise, we have expanded our offering and we now blend consumer, corporate and capital markets work for some of our clients. If you’re an AIM-listed business and you’re aiming for the stars, Houston would be the perfect agency – and we have plenty of evidence!

We’re strong in leisure, retail, technology, education, consumer brands and start-ups. We’re hot on ethics, so there is a smallish list of sectors that we have, and always would, turn down. A lot of people who come to us for advice have that nagging feeling that the world should be taking more of an interest in what they’re doing. We’re very good at helping them to do that.

Finally, do you have any plans to spend something else into space?

I sent something recently as part of a personal experiment about tribes. It hasn’t worked brilliantly so far but I’m undaunted. Failure is a valuable thing and it’s a great thing to ask your agency about.

In Silicon Valley, famously, if you are a failed entrepreneur, you’ll get a better hearing, because the assumption is that you’ve learned from the experience. I guess my view is that if an agency isn’t failing every so often at things (without consequence), they’re not trying hard enough and they’re not being adventurous enough.

In other words, if your agency isn’t failing, you’re probably paying them too much. Now there’s a headline.

Opinion: Why “PR” is having a renaissance
Brendon Craigie, co-founder and managing partner at Tyto PR, examines why PR professionals are once again adopting the PR moniker. The public relations industry is in the [...]
News Analysis
Request a Demo and Pricing
Connect on Social:
60 Seconds with Another Word’s Lynda Redington