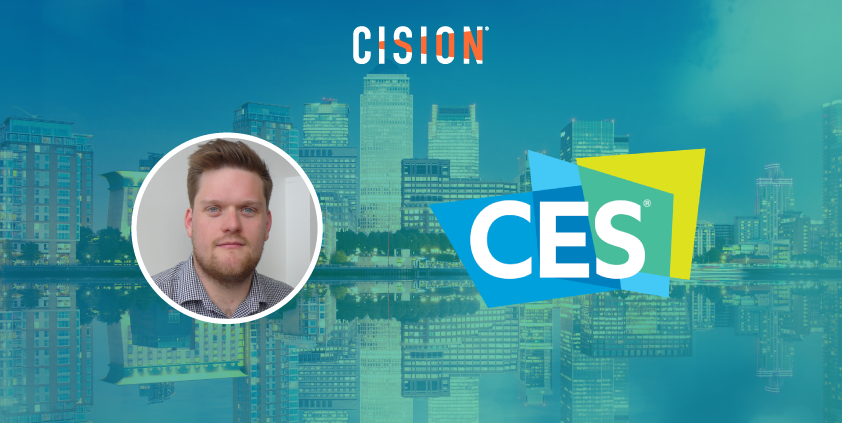 As the first major trade show of 2018, the annual Consumer Electronics Show (CES) in Las Vegas is the first big outing for technology companies of the year.

From a brand perspective, it is the first crucial opportunity to generate real media excitement and conversation, setting the tone of voice for the year ahead.

As technology continues to evolve and embed itself in every area of our consumer and work lives, the Insights team at Cision – which measures and analyses media coverage for thousands of brands and clients – has taken a look at how the major tech trends and organisations have played out in the earned media space during the event.

Perhaps surprisingly, developing technologies are still playing second fiddle to traditional electronics products. This is in spite of the hype around Artificial Intelligence (AI) and smart assistants, emboldened by Alexa and Google Home’s PR battle in the run up to the event.

In fact, 55% of media coverage discussed consumer entertainment electronics such as TVs, phones, speakers and cameras. It seems AI has struggled to gain a foothold so far this year, in many ways because it is promoted as a concept without a specific product tied to it with any authority. For example, Alexa is powered by AI, but only 24% of articles that feature Alexa actually mention AI.

One AI-enabled device that cut through the noise is Aibo, Sony’s AI-enabled robo-dog that generated a 9% share of voice among the top seven AI brands. (The other six brands are Amazon, Google, Samsung, Apple, LG and Microsoft.)

One of the most interesting peaks in coverage came from the automotive industry. Driverless cars and other automotive innovation seem to have caught journalists most by surprise at CES, having generated the largest uptick in conversation on the first day of the conference.

This has been bolstered by big partnership announcements like Volkswagen/NVIDIA/Uber, which won Volkswagen the biggest share of voice among its 12 OEM (Original Equipment Manufacturer) competitors, securing at 13% of their total coverage.

This is a great example of how big partnership announcements can steal the show at these events, and is reinforced by Amazon and Google’s coverage. Alexa and Google Home landed them first (Google at 23%) and second (Amazon at 18%) place for share of voice among the top seven brands at CES, largely thanks to their partnerships with other brands. (The seven brands are: Google, Amazon, Samsung, LG, Apple, Sony and Panasonic.)

Finally, a special mention this year for Apple. It managed to appear in 10% of coverage around CES despite not attending the actual event. It’s strong testament to Apple’s incredible brand prominence in the technology space!

Opinion: Why “PR” is having a renaissance
Brendon Craigie, co-founder and managing partner at Tyto PR, examines why PR professionals are once again adopting the PR moniker. The public relations industry is in the [...]
News Analysis
Request a Demo and Pricing
Connect on Social:
Is Fake News…fake news?