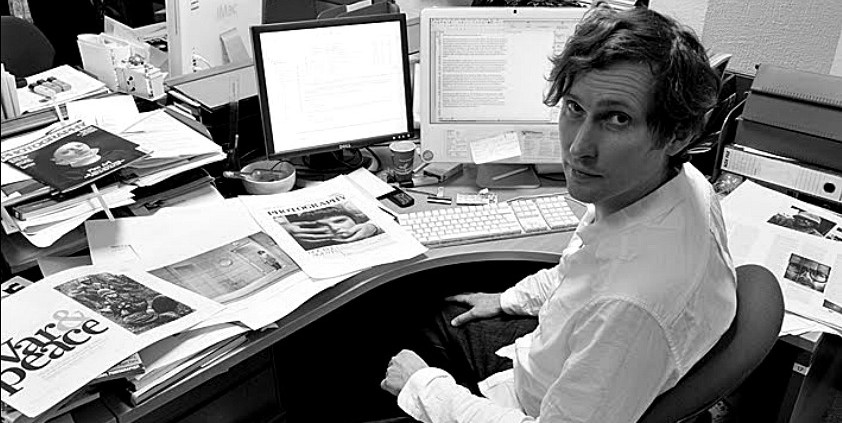 Simon Bainbridge, editorial director of The British Journal of Photography, on the 162-year-old magazine’s recent redesign, writing about the ideas behind images and his healthy relationship with PRs.

The British Journal of Photography is the world’s longest running photography publication. Who are your readers and what interests them?

Our core readership is professional photographers and people in related roles, such as picture editors, curators and educators. They’re interested in keeping up with new trends in the industry (be they visual, technological or about the business), but also in photography as an art form with its own distinct culture and history.

Why did you decide to redesign now?

We’re read by visual communicators with a sophisticated appreciation of design, and it’s six years since our last refresh. Besides, we are always working to improve and surprise readers.

Last time around was more radical. We switched from the weekly trade journal format we’d run for 150 years to a more thoughtfully produced monthly magazine. But we were a little constrained by the company we were working for, and also in our own thinking. Three years ago we went independent, and in that time there’s been a revival in print, led by a small army of small independent publishers with a strong sense of identity and uncompromising production and editorial values. Now we’re an indie publisher ourselves, it was time to up our game.

We are aiming for a balance: on the one hand we have this 162-year-old heritage as the world’s longest running photography magazine, and on the other, we must remain relevant to and champion the emerging generation. The design has to reflect that.

Talk us through the redesign.

Every section has been expanded – we are roughly 50 percent fatter than before, ranging from 116 to 132 pages, as opposed to 84 to 100. That gives us more room to do much more; extra articles, more long form journalism and, of course, extra space for the photography that is our primary content.

I have also introduced some new regular treatments. We have a monthly feature called ‘Any Answers’ that aims to draw more reflective, philosophical answers from subjects (the first of which is Erik Kessels, the Amsterdam-based art director, publisher and curator), revealing some of their wisdom and the thought processes behind their work. We are commissioning portraits to run alongside. We also have a new feature called ‘Creative brief’, in which we talk to the people who commission photographers about their work and the choices they make. We are keen to bring more of these voices into the magazine. We want the magazine to be useful, as much as inspiring, for visual creatives.

How is the editorial team structured?

Two of us work on the monthly edition (print and iPad); myself, and executive editor Diane Smyth, who’s been with us more than ten years, progressing from features editor, then deputy. She takes ownership of three issues per year, and we both work on other projects. We have an online editor, Tom Seymour, who also contributes features to the monthly, and a digital producer, Brennavan Sritharan, who works across editorial, marketing, events and advertising.

Who are your competitors in this space, and what does the newly designed publication offer that sets you apart?

We sit between the camera magazines like Amateur Photographer, which has been going nearly as long as we have, and the more artsy academic titles such as Aperture or Foam, which come out less frequently and get state or foundation support. What sets us apart is that we’re very much about the ideas behind images rather than the technique. But, we communicate them in a way that’s lively and accessible, and we put the art into the context of a medium that has creative commercial applications and, of course, is used by people in everyday life.

Healthy. They are often the gatekeepers, so they can be incredibly useful or they can be a barrier. We aren’t reliant on them, and in general we prefer to talk direct to people. Luckily, in photography you can still pick up the phone and talk to most people. But, of course, if you want to talk to Canon or Nikon or Sony, you go through PR people, and its imperative you have good relationships with them and can explain what you do, or you tend to get lumped into the same bag as your competitors.

What are your top three tips for PRs when pitching?

Your first issue after the redesign had a strong science and technology theme. Why did you choose this and will future issues have similar themes?

All our issues are themed. Some are regular themes based around genres, such as portraiture or visual journalism, for which we go in search of a tighter angle, such as war reporting, others are our annual talent issue, or our end-of-year ‘Cool & Noteworthy’ edition, which presents the most exciting trends, projects and developments. We also do one-offs to keep it fresh, such as our issue looking at the correlation between age and creative output, or our issue ten years after 9/11, looking at images as a war of propaganda.

We spend a lot of our time looking for new stuff, casting our net wide then joining up some of the dots to find a theme we then research further into. That was the case with the science and technology issue; I found a couple of projects that were extraordinary and related to each other, then went looking for others that would work well with them.

Our May issue is our pick of some of the most interesting recent commissioned photography. June is our talent issue, which draws on our worldwide network of experts to nominate emerging photographers from Tokyo to Rio. July is more esoteric, featuring work that draws on literature and mythology. August focuses on education, and September we’ll tackle migration and how that can be understood through longterm art and documentary projects that offer something different from how spot news represents the crisis.

And finally, what will be the most exciting development to happen in the photography space this year?

Virtual reality has come of age, particularly in the sphere of visual journalism. We’ll see more projects like The Displaced, where photographers who want to tell deeper stories and bring viewers in closer to the lives of their subjects collaborate with enlightened media and technology companies.

Meet the Journalist: The Brighton Beezer publisher, Ilana Fox
Ilana Fox, the woman behind The Brighton Beezer, tells Gorkana’s Ona Zygaviciute about why she launched the publication, what makes it unique – and the role print journalism [...]
Interviews
Request a Demo and Pricing
Connect on Social:
Behind the Headlines with LEWIS’ Ranj George